Member of the Development and Liberation parliamentary bloc in Lebanon MP Qassem Hashem vehemently condemned the explosion which targeted a UN convoy in Saida 20 kms south of Beirut in which six Italian soldiers and two Lebanese civilians were injured.

In an exclusive interview with Al-Manar Website, Hashem said that “the blast targets the Lebanese national stability and security at the same level it targets the United Nations Interim Forces in Lebanon (UNIFIL)”. He warned that “such a blast serves Lebanon’s enemies and the Israeli enemy at the first level as it is aimed at establishing a relationship of mistrust between the southerners and the UNIFIL forces”.

While criticizing the incidents which erupted in the Telecoms ministry on Thursday, the MP stressed the necessity to “form a strong and effective government as soon as possible” and said it was the responsibilities of all concerned forces to seek mutual understanding and overcome differences.

UNIFIL’S MARTYRS ARE OUR MARTYRS
The Lebanese southern lawmaker told Al-Manar website that the blast which targeted a UN patrol in South Lebanon was condemned at both national and ethical levels. “It targets the Lebanese national stability and security at the same level it targets the UNIFIL forces”.

Hashem pointed to the timing of “the crime”, which came in the middle of a tense situation in the country in light of the political void as well as the developments at one of the Telecoms buildings.

He was referring to the Telecoms Ministry incidents, when some 400 heavily-equipped members from the Internal Security Forces’ Information Branch banned Telecoms Minister in the caretaker government Charbel Nahhas from entering the second floor of the building attached to the ministry in Beirut.

TARGETING UNIFIL SERVES ZIONIST ENEMY
While stressing that the message behind the blast was addressed to Lebanon as a whole before the UNIFIL forces, Hashem did not rule out a link between the blast and what happened lately in the South, in reference to the May 15 “Return to Palestine March” at the borders with the occupied territories.

He pointed out that the message could be addressed to the UNIFIL forces which did not act according to the Zionist beliefs that it was there to “protect the Zionists’ security and defend their stability.”

Hashem concluded that “targeting the UNIFIL forces is therefore aimed at serving Lebanon’s enemies and the Israeli enemy at the first level, in order to establish a relationship of mistrust between the South citizens and the UNIFIL forces”. 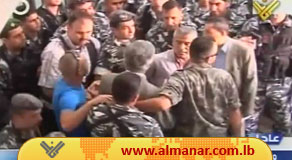 The MP also did not rule out a link between the blast and what happened lately at the Telecoms ministry.
He said that Thursday’s events showed Lebanon in a situation of complete fiasco amid full collapse of all norms and institutions. He warned that such situation made it easy for Lebanon’s enemies to penetrate the Lebanese scene, carry out their evil schemes and increase tension on ground.

On the call made by the head of the Change and Reform parliamentary bloc of Lebanon MP Michel Aoun to President Michel Sleiman to sue Internal Security Forces Chief Ashraf Rifi in light of Thursday’s events, Hashem said that Sleiman’s message to Justice Minister in the caretaker government Ibrahim Najjar came in the same framework.

According to Hashem, Aoun has confirmed the possibility for the Prosecutor General to deal with the issue especially that the ISF chief did not abide by the orders of his administrative boss, who’s in this case the Interior Minister. “Rifi’s refusal to carry out Baroud’s orders is believed to be mutiny,” he added.

CABINET'S BIRTH NATIONAL INTEREST
The Lebanese lawmaker stressed the necessity to form a new government as soon as possible. “The need for this cabinet to see light becomes clearer day after another,” he said. He held all political parties responsible of reaching common factors and overcome all difficulties to form the government. He stressed that the cabinet’s birth was not only in the interest of the new majority but also a national one.

On the latest statement made by the head of the National Struggle Front MP Walid Jumblatt in which he claimed that Hezbollah does not want to form a new government, Hashem said: “Let’s wait a clarification for this stance.” He stressed that all sides are responsible, especially the main constituents of the government.

He warned that challenges, developments and circumstances require the formation of the government today before tomorrow.