Turkish people are set to go to polls on Sunday, with wide expectations that Prime Minister Recep Tayyip Erdogan’s party is to win a third straight term in power.\r\n 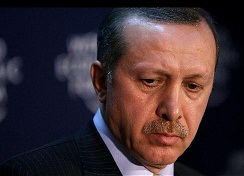 Turkish people are set to go to polls on Sunday, with wide expectations that Prime Minister Recep Tayyip Erdogan’s party is to win a third straight term in power.

According to pollsters, Erdogan's Justice and Development Party (AKP) is expected to cruise to victory with between 45 and 50 percent of the parliamentary vote, enough to form its third one-party government since 2002.
It took 47 percent in 2007 parliamentary elections.

Erdogan addressed supporters on Friday in the eastern cities of Erzurum and Agri. He urged them to deliver an AKP majority in return for "further democracy, fundamental rights and freedoms".

Erdogan is expected to return to Ankara, the capital, before travelling on Saturday to his home city of Istanbul, where he is standing as a deputy.
He has pledged to draft a new constitution that he says would enhance individual freedoms and make Turkey more democratic, if he secures a large enough majority to do so.

But his opponents, including the main opposition Republican People's Party (CHP) and Nationalist Movement Party (MHP), accuse the ruling party, which mixes economic liberalism with Islamic-rooted social conservatism, of seeking to consolidate their grip on power.
They say that a new constitution should be agreed in concert with all parties and with the country at large.

Candidates from 15 parties, as well as many independent candidates, are standing for election to Turkey's 550-seat parliament in provinces across the country.
But parties need to win at least a 10 per cent share of the national vote to be elected to parliament.

Political campaigning must end by 6 pm local time (1500 GMT) on Saturday, according to Turkish election law.
More than 50 million people are eligible to vote in Sunday's election.