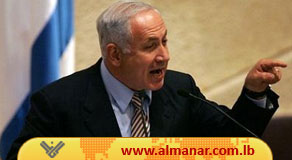 After 18 years of failed “peace talks” and after being fully satisfied with the US Administration stance in the UN, Israeli Prime Minister Benjamin Netanyahu urged Palestinian President Mahmoud Abbas to meet with him at the United Nations to discuss Middle East “peace” efforts.

"Let's meet today in the United Nations," Netanyahu said in an appeal launched during his address to the UN General Assembly shortly after Abbas presented a formal bid for UN membership for a Palestinian state.

But Abbas was due to leave New York later, leaving the UN Security Council to wrestle with the Palestinians request that is likely to take several weeks before being brought to a vote, leaving time for further negotiations.

Netanyahu told the UN General Assembly that he was “reaching out” to the Palestinian people but cautioned that “peace” could not be won with a UN resolution.

"The Palestinians should live in a future state of their own, but they should be ready for compromise," he said, adding that Palestinians had to ensure Israel's security.

Netanyahu added that if there was such a peace, "Israel will not be the last state to welcome a Palestinian state into the United Nations. We will be the first." It was also time for the Palestinians to acknowledge that "Israel is the Jewish state," he told the assembly.