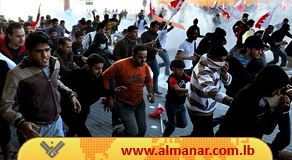 Bahrain's opposition said Monday it considered any foreign military intervention to be an occupation, shortly after a Saudi official said the kingdom's troops had entered the Gulf state.

"We consider the arrival of any soldier, or military vehicle, into Bahraini territory.... an overt occupation of the kingdom of Bahrain and a conspiracy against the unarmed people of Bahrain," said an opposition statement.

The Financial Harbour business complex was blocked off by protesters a day after more than 200 people were injured there in clashes between riot police and demonstrators, residents said.

It was the worst day of violence in the tiny Gulf kingdom since seven people were martyred at the start of anti-regime unrest in mid-February.

Demanding King Hamad bin Isa Al Khalifa's ouster and constitutional reforms, the demonstrators have been peacefully camping in the Pearl Roundabout since February 14. The thousands of protesters camped in the square, which has become known to many as "the Martyrs Roundabout," in memory of those that died during Manama-ordered suppression of the popular uprising, saying they will not leave until the king steps down and the government implements political and economic reforms.

Many Bahrainis are now nervously looking across to Saudi Arabia and wondering whether the neighboring kingdom will send troops to prop up its close ally, the Khalifa monarchy.

The Guardian reported on Monday that Salman bin Hamad al-Khalifa, Bahrain's crown prince, would formally request a Saudi intervention later in the day.

Opposition parliamentarian Ali al-Aswad said a government official had informed MPs that Saudi security forces had been invited into the city to help quell the unrest. "A government source told us during the night that the issue is serious and a decision (to invite foreign forces) has been taken," he told AFP. He said the opposition would resist any such intervention as a foreign invasion.

"If Gulf forces enter Bahrain the people of Bahrain will deal with them as if they were occupation forces. We won't allow any foreign interference, either regional or Arab in Bahrain," he said.

Britain's Foreign Office cited reports that the Saudi National Guard will enter Bahrain as it urged Britons to avoid all travel to the country. "The risk of further outbreaks of violence has increased," it said in the note issued late Sunday.

The website of Bahrain's Alyam newspaper, which is close to the Al-Khalifa royal family, said forces from the six-state Gulf Cooperation Council were expected to enter Bahrain to help boost security.

CONDEMNATIONS
The White House, which considers Bahrain a key ally, condemned Sunday's violence, urging the government to "pursue a peaceful and meaningful dialogue with the opposition rather than resorting to the use of force."

US defense secretary Robert Gates met with King Hamad bin Isa al-Khalifa in Manama on Saturday, and while he urged political reforms, he also praised Bahrain's government for moving ahead with "a process of reform while sustaining stability and continuity."

The British foreign office, meanwhile, said on Sunday that its citizens should avoid all travel to the Gulf kingdom.

Iranian Foreign Minister Ali Akbar Salehi has called on the Bahraini government to refrain from using force and violence against protesters. "It is expected from the Bahraini government to deal with the demands of the people with insight, and to respect the rights of people, who are following up on their demands through peaceful means," Salehi said in a statement by the Foreign Ministry on Sunday.

Hezbollah issued a statement on Sunday condemning the “bloody suppression” targeting demonstrators in Bahrain, and added that the use of violence to suppress peaceful demonstrations came right after Gates visited Manama. “Such irresponsible action against citizens is a violation of the freedom of expression. Such intensive use of violence does not serve Bahrain’s future and negatively affects its stability.”