The Palestinian reconciliation was directly affected by the regional developments and the loss of trust in the United States’ limited efforts in assisting Palestinians.

The Palestinian reconciliation did not rely on compromises or concessions to come out; it was rather awaiting the regional developments, the revelation of the true Israeli-US intentions, and the failure of every settlement solution presented.

Hamas did not change its resistance strategy and did not even reveal any intention to do so. It has always been and will stay an armed resistance that, according to Hamas politburo member Oussama Hamdan, regards other types of resistance as supporters to the armed one.

“Hamas clearly and firmly adopts the armed resistance path, and experience has proven us right”, Hamdan said in an interview with Al Manar website.

Furthermore, the Islamic Resistance movement still rejects the Quartet (United Nations, European Union, Russia and the United States) conditions that stipulate abiding by past agreements, recognizing Israel and discarding violence, as well as any other condition presented by Israel and supported by the United States.

As for Fatah, it certainly chose to take another path vis-à-vis its internal relations after it sensed the failure of its negotiations with the Zionist entity, under U.S. patronage. Moreover, the party was aware of the limited efforts by the United States to stop Israel from building settlements on occupied Palestinian territories and to assist the Palestinian Authority in achieving some political gains.

According to The Guardian newspaper, “there are three chief reasons why, after four years of bitter and violent conflict between the rivals, Fatah acceded to all of Hamas's political conditions to form a national unity government. The first was the publication of the Palestine papers, the secret record of the last fruitless round of talks with Israel...The second was the loss to the Palestinian president, Abu Mazen, of his closest allies Hosni Mubarak and his henchman Omar Suleiman. While they were still around, Gaza's back door was locked. But the third reason had little to do with either of the above: Abu Mazen's faith in Barack Obama finally snapped”.

For his part, Hamas Politburo member has emphasized to Al Manar, the positive and major role that the Egyptian side had played for accomplishing the reconciliation “without interfering or imposing any kind of conditions on the Palestinian side”, signaling the Mubarak regime’s approach during past reconciliation talks was about conditions on Hamas. 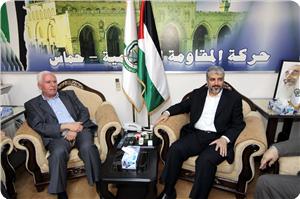 The new phase that the Palestinian parts chose to take, is basically a regulative one that paves the way for detailed negotiations, fair elections, a national unity government, and the reconstruction of Gaza.

Hamdan assured that “this reconciliation will include all the Palestinian factions, as all of them recognize the importance of ending the internal division. In addition, we are ready to make concessions on the internal level but not to the occupation or to American pressure.”

He said that “no pre-conditions were imposed by any part, as this was pure dialogue.”

“However, we agreed that there should be consensus on the next Prime Minister. Everyone has certain remarks and question marks on Salam Fayyad and his performance, not just Hamas, but even Fatah and other Palestinian factions,” he pointed out.

On the other hand, Palestinian Ambassador to Lebanon Abdullah Abdullah preferred not to mention any points of differences and rather told Al Manar website that “after we’ve achieved Palestinian national reconciliation, no political conflict is worth mentioning”.

Abdullah indicated that the resistance spirit will always exist among Palestinians for “if the Palestinian stops resisting, his situation would be similar to a fish that was taken out of the water. However, there are different methods and techniques for resisting that vary according to time and place”.

Regarding peace with the Zionist entity, the Palestinian Ambassador assured that “peace is the result of every conflict in the world. You attain it either by a deathblow, meeting and specifying each part’s rights and obligations, or by finding a third party that would supervise and propose a solution”.

The Independent echoed Abdullah’s comments in its own words and backed the Palestinian reconciliation in its own way, by reminding the West in general and the EU in particular that they had made a serious mistake when they refused to recognize Hamas and its democratically elected government in 2006. ” After five years, it should be clear to all that freezing Hamas out of negotiations is not going to make the movement disappear. The history of all previous intractable conflicts demonstrates that peace comes through sitting down with enemies, not ostracising them.”