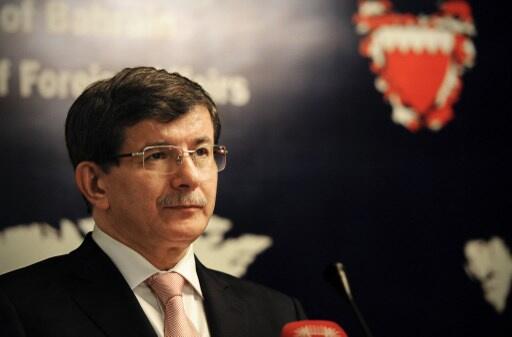 Turkey on Thursday condemned the publication of cartoons of the Prophet Mohammad (PBUH) as an "open provocation," warning that it would not tolerate insults.

Turkey on Thursday condemned the publication of cartoons of the Prophet Mohammad (PBUH) as an "open provocation," warning that it would not tolerate insults.

"Freedom of the press does not mean freedom to insult," Prime Minister Ahmet Davutoglu told reporters in Ankara before heading for talks with EU leaders in Brussels.

His comments came day after leading Turkish daily Cumhuriyet and Turkish websites published cartoons featuring the holy prophet from the first issue of French satirical magazine Charlie Hebdo after the attack on its offices on January 7 that left 12 people dead.

"We do not allow any insult to the prophet in this country," Davutoglu said.
"As the government, we cannot put side by side the freedom of press and the lowness to insult."

Davutoglu said people were sensitive about their religion in Turkey and could not be expected to show patience towards insults to the prophet.

"If some print cartoons that insult the prophet -- and this is the situation and there is a sensitivity in Turkey -- it is a provocation... it is an open provocation."

He said Turkey had squarely condemned the Paris attacks that killed 17 people in total but would fight with equal vehemence against insults to the prophet.

"We are determined to protect the honor of the prophet the same way as we are determined in our stance against terrorism in Paris ... It is not correct to link this to the freedom of the press."

"Netanyahu has committed crimes against humanity the same like those terrorists who carried out the Paris massacre," he told reporters in televised comments.

The Turkish PM‘s remarks risk ratcheting up a new row in the increasingly tense relationship between Ankara and Tel Aviv after Turkish President Recep Tayyip Erdogan blasted Netanyahu for "daring" to attend the weekend's anti-terror solidarity march in Paris after the attacks.

In 2010, Israeli commandos stormed the Turkish-flagged Mavi Marmara, the largest ship in an aid flotilla for the besieged Gaza Strip.

Nine Turks died in the raid and one more died in hospital this year after four years in a coma. Meanwhile nearly 2,200 Palestinians, mostly civilians, were killed in Israel's offensive on Gaza earlier last year.

Davutoglu said Netanyahu was "the head of a government which massacred children playing in the beaches in Gaza and destroyed thousands of houses."