In an interview with Al-Manar Website, Former Deputy Head of the Lebanese Phalange Party Lawyer Rashad Salame said that US Jeffry Feltman has promised his Lebanese allies that Al-Assad’s regime will be toppled.

Former Deputy Head of Phalange party in Lebanon Lawyer Rashad Salameh said some armed and financed sides were behind the recent developments in Syria, and noted that the Syrian state has positively dealt with the legal reform demands, “but it turned out that what was happening on ground was actually an organized military operation.”

In an exclusive interview with Al-Manar Website, Salameh said that a true conspiracy was targeting Syria, and undermined the threats launched by some Western leaders to “isolate” the Syrian regime. He recalled that isolation was not new for Syria, and that Syrians were able to overcome this threat throughout all previous stages.

While expressing confidence in the awareness and authenticity of the Syrian people, he revealed that the Americans have offered to their thugs and allies in Lebanon a “promise” that the Syrian regime would collapse. He said that US Assistant Secretary of State for Near Eastern Affairs Jeffrey Feltman has assured his allies, during his latest visit to Beirut, that the Assad regime in Syria would be toppled. He put the latest statement made by former Prime Minister Saad Hariri in this context, and expressed belief that Hariri got a dose of American before issuing his statement in which he condemned the Syrian regime.

Concerning the international tribunal, lawyer Salameh said he was fully convinced of Hezbollah Secretary General Sayyed Hasan Nasrallah’s statement in this regard, and confirmed that the so-called Special Tribunal for Lebanon was violating all international standards. He found strange how the indictment could turn to a “long and evil American series,” and stressed that serious investigation starts by questioning false witnesses who misled the investigation and, therefore, concealed the true culprits.

Lawyer Rashad Salameh told Al-Manar Website that the latest incidents in Syria were a proof that the opposition movement, which started with legal reform demands, turned to something else. He noted that the Syrian regime positively dealt with the reform demands, mainly in relation with the multiplicity of parties, amendment of the constitution, holding the elections, reinforcing political life, and increasing freedoms. 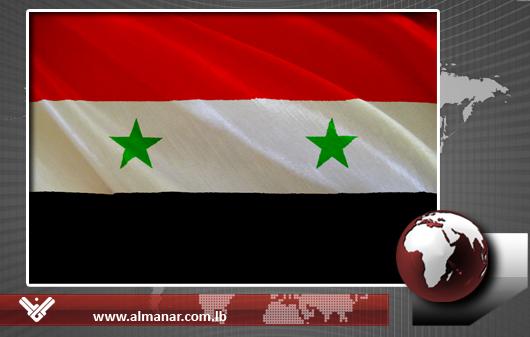 But Salameh said that incidents showed that military operations were taking place on ground, and backed his idea by pointing to the huge number of martyrs within the security forces and innocent civilians. “This huge number of martyrs signals that there’s an armed and financed side behind the incidents. It also shows that this side was well-prepared for these acts,” he added.

Salameh regretted that some Western states reject to see the picture in its real form. He said that these sides were not demanding reform but the collapse of the regime. “This is a conspiracy which is using some tools seeking to create strife in Syria,” he warned. “Although they claim they are an opposition in opinion, everything shows they’re not. In fact, we’re before some armed groups that seek to attack official buildings, manipulate the train line, and explode oil pipelines.  The Syrians cannot remain silent before such violations, crimes, threats to the general stability and security.”

While stressing that the Syrian army was still unified alongside the majority of the people in support of the current regime, he criticized the stances made by some Western states in support to the armed groups. “Some Western officials give themselves the right to claim, with an order tone, that this regime should end. Such rhetoric strengthens the international conspiracy theory, where some states that we believed to be democratic take part.”

Salameh recalled, in this context, the stances made earlier by Turkish Prime Minister Recep Tayyip Erdogan, in which he said that, as part of the NATO alliance, he would carry out any decision to militarily interfere in Syria in case such decision was issued by the United Nations Security Council (UNSC). He also pointed to the statement made by Syrian former Deputy President Abdul Halim Khaddam who called, through an Israeli TV station, for a military operation in Syria. He said that all these signs show the depth of the conspiracy targeting Syria at this stage.

SYRIA HAS SUFFICIENT IMMUNITY TO RESIST

Lawyer Rashad Salameh commented on the latest stance made by US President Barack Obama in which he declared that the United States will continue to increase its pressure on the Syrian regime, and work with others around the world to isolate Al-Assad’s government. 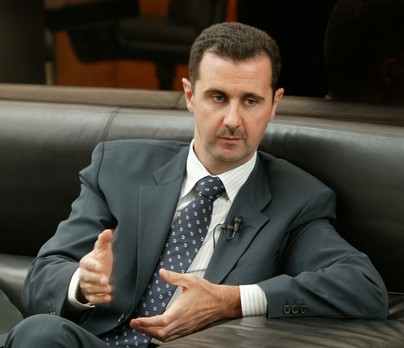 Salameh pointed to the biased media coverage of the Syrian developments. He noted that some Arab and European media panels, including the Italian Television, claimed Sunday that the number of victims exceeded 136 in Hamah only and that the total number of victims throughout Syrian districts exceeded 350. “It turned out that these numbers were not accurate, according to the same panels,” he said.

Concerning the American President’s promise to isolate the Syrian President, Salameh said that such threats are baseless. He recalled that Syria has experienced isolation since over five years, when former US President George W. Bush took the decision to isolate Syria. He said that Syria was able to overcome its crisis and restore its natural role, when France was more moderate.

He also said that Syria did not have fears over the Lebanese situation because Lebanon is a strong state. He said that Lebanon was great by resistance’s victories, alongside the Resistance-Army-People balance, which reflected Lebanon’s unity. He further pointed out the tense relations between Turkey and Syria.

While concluding that Syria had enough immunity to stand in the face of the conspiracy, he recalled the previous stage during the rule of late President Hafez Assad. “At that time, Syria was under siege from Turkey, Jordan and at the same time Iraq’s Saddam Hussein. Yet, it was able to overcome this status through its relation with Lebanon and mainly, through the strategic relation with the Islamic Republic of Iran. Therefore, this is not the first time in which Syria is targeted.”

Lawyer Salameh revealed that the Americans have offered their thugs and allies in Lebanon a “promise” that the Syrian regime would collapse. He said that US Assistant Secretary of State for Near Eastern Affairs Jeffrey Feltman has assured his March 14 allies, during his latest visit to Beirut, that the Assad regime in Syria would be toppled.

Commenting on Feltman’s stance that Syrian President Bachar Assad will not triumph, Salameh noted that it was Feltman who launched such a slogan, not the Syrian nation. “If I was Syrian and I heard such statements, I would have perceived that there was an external danger and that claiming that the issue was purely internal was not true.” He also criticized the American administration’s claims that it refused the interference of anybody in Syria’s affairs “as if it was preventing the whole world, except itself, from interfering in others’ affairs.”

Salameh, who said Feltman’s promise to his allies, over the collapse of the Syrian regime, was not frank, also uncovered that the US diplomat advised his allies to stay silent. “Some of them accepted the advice but others did not,” he said, adding that he did not find strange the latest stance of former Prime Minister Saad Hariri. “Hariri was committed to the advice for a while, but it seemed that he got a dose of American reinforcements, so he issued the delayed statement,” he said. “Hariri must remember that Syria’s stability was an essential condition for Lebanon’s stability, and vice versa. His statement was not useful for Hariri himself, for Lebanon or even for the future of the ties between Lebanon and Syria.”

Lawyer Salameh said that someone has convinced the American administration and its followers that the fate of the region can be in the hands of specific radicals, given that these radicals could be allies to the US. He warned against such option, and recalled the dangerous sectarian conflict that recently took place in Egypt. He recalled, in this context, WikiLeaks’ cables that quoted former PM Saad Hariri as advising Jeffrey Feltman to “try Bayanouni (Muslim Brotherhood) and Abdul Halim Khaddam” and telling them that they would find them moderate. “It seemed that the Americans have believed Feltman’s advice and chose to apply it,” he added.

Salameh, who said he fully trusted the Syrian nation’s originality, expressed belief that Syrians will not accept extremist radicals as an alternative for the current regime. “Under their control, freedom would not get any better. This is the alternative prepared by the ongoing conspiracy against Syria.”

To conclude, Lawyer Rashad Salameh tacked the Special Tribunal for Lebanon, and said he fully agreed with Hezbollah Secretary General Sayyed Hasan Nasrallah in this context. He said that Sayyed Nasrallah’s vision reflected the truth, whether at the level of the investigation’s measures or the amendments to the internal rules of regulation. 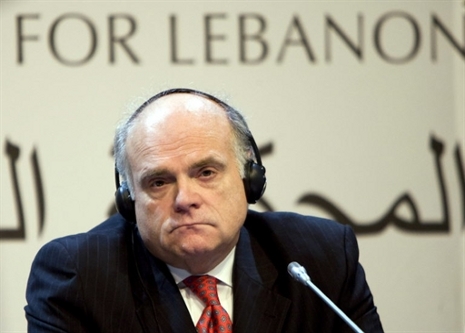 Salameh said the tribunal was not unconstitutional, and noted that the process has started at the moment in which the government of Prime Minister Fouad Saniora requested its creation under chapter seven. He pointed to the agreement that was signed between the United Nations and then Justice Minister Khaled Qabbani, which contradicted the constitution. “The Lebanese Republic cannot be the confined to the Justice Minister, as there’s a President who, according to the constitution, is the one eligible to sign external agreements. Add to this the fact that Saniora’s government was not constitutional.”

Salameh also pointed to the suspicious change of accusations according to the political developments. “At the beginning, Syria was the target, and the four officials were the victims. If an indictment was issued at the time, then the main suspect would have been Syria without doubt,” he stressed, adding that it has been proven that this tribunal violated all legal standards.

He also noted that Sayyed Hasan Nasrallah has offered solid evidence concerning an Israeli possible role in the assassination of former PM Rafiq Hariri, but that the tribunal chose to reject it. “Prosecutor Daniel Bellemare had declared that the evidence will not change the course of investigation even before receiving them,” he recalled.

“The US and Israel were the first to benefit from the crime. But they will never be among the suspects,” he stressed.

In parallel, Salameh said that Lebanon should be ready for the sanctions some sides are seeking

to impose against it. He noted, however, that such sanctions would include all Lebanon, and not a specific political party. He warned that such option would undermine stability in the country and increase the horizontal division within the Lebanese.

Legally, Salameh also noted that Hariri’s murder was never among the crimes that should be explored by international tribunals. He noted that those concerned have sought to find the best definition of “terrorism” that could correspond to Hariri’s murder, and found it in a “silly” article in the Lebanese law. He noted that only in this law, there’s no reference to a crime against humanity, or annihilation.

According to Salameh, another violation to the international law by this tribunal was the release of “various” indictments. “We believe that there’s only one indictment in all causes. With this cause, they’re promising us of many. This is unpopular. We’re speaking of an indictment, not of an evil and boring American series.”

To end, Salameh stressed that whoever really wants the truth could not reach it through this tribunal and this investigation. He said that serious investigation must start by questioning the false witnesses who lied, misled the investigation, and hid the real culprit.