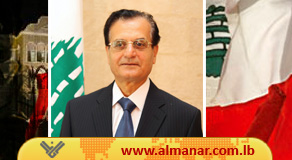 Lebanon on Wednesday backed Damascus in rejecting the Arab League's call to end crackdown in Syria, according to a report by DPA.

"Lebanon stands by brotherly Syria and its stance is clear in this regard,” Lebanese Foreign Minister Adnan Mansour was quoted as telling al-Nour radio station.

Mansour said the Arab League's statement had not been agreed upon by all participating nations. “A consensus had been reached by the conferees not to issue a statement at the end of the meeting but some attending the meeting, breached it and issued it.”

“Such a stand by some of the Arab League's foreign ministers prompted the Syrian delegation to send a diplomatic note to the Arab League's general secretariat in which it noted that the released statement did not reflect the meeting's final agreement,” Mansour said, adding that Syria was right in doing so.

Arab states told Syria on Sunday to "resort to reason" and end “bloodshed”.

Arab League foreign ministers also agreed to send Secretary-General Nabil Elaraby to Syria to push for political and economic reforms in the country. A delegate to the League has said Arab governments would step up pressure on Assad at a summit on Saturday.

"There has been an agreement in talks held between the Arab states on ... pressuring the Syrian regime to completely stop the military operations and withdraw its forces," the delegate said.

"A clear message (will be sent) to the Syrian president that it has become unacceptable for the Arab states to stay silent on what is happening in Syria, especially following the Security Council's move to impose sanctions on Syrian officials and the condemnation from the United Nations Human Rights Council," said the delegate, who asked not to be named.